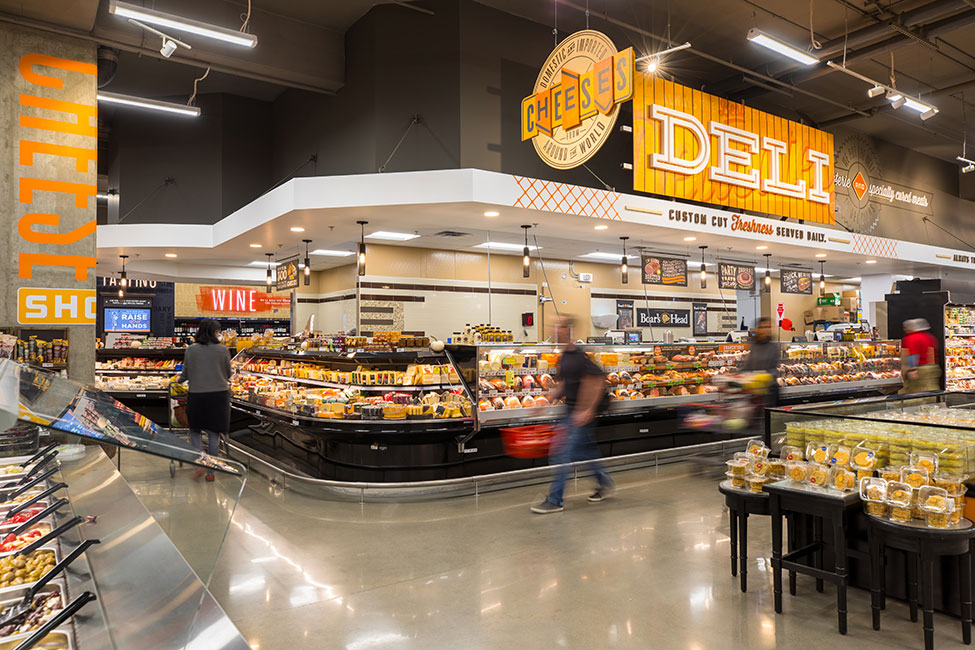 When Patsy Burdine and her husband moved to Houston earlier this year, the New Orleans transplants chose to live at One Park Place — in large part because their downtown apartment unit has a grocery store downstairs.

The 56-year-old author and speaker said they stop by Phoenicia Specialty Foods at least twice a week, relishing their minutes-long elevator ride. They no longer have to battle traffic to go grocery shopping.

“It was a huge motivating factor,” Burdine said of the grocery store. “There’s a ton of great choices in Houston for apartments, but to have a place you can run down to for the smallest thing is an easy choice.”

Whole Foods Market opened a 40,000-square-foot store on the ground floor of Pearl Marketplace on Nov. 7. The eight-story mixed-use project, developed in partnership with Houston-based Morgan Group, features 264 apartments atop the supermarket in Midtown.

Last month, H-E-B opened a 96,000-square-foot store on the ground floor of Buffalo Heights. The seven-story mixed-use project, developed in partnership with the Gordy family and Houston-based Midway Cos., features 230 apartments and 37,000-square-feet of office atop the supermarket at the corner of Washington and Heights.

These grocery-anchored mixed-use projects point to the densification of Houston, and are transforming the way some urban residents live, shop and cook.

“The suburban business model doesn’t work anymore,” said Scott Ziegler, principal of Houston-based architecture firm Ziegler Cooper, which designed the two new grocery projects. “People are tired of getting into cars to get their groceries.”

The chief executive of Houston-based apartment developer Finger Cos. didn’t charge rent to Phoenicia for the first two-and-a-half years to entice its owners, the Tcholakian family, to put an outpost of their popular West Houston supermarket in downtown Houston. The gamble paid off, and Phoenicia helped draw hundreds of residents to the building.

Since then, two major grocers have followed in Phoenicia’s footsteps.

“We’re trying to cater to the apartment and office crowd,” Lisa Helfman, H-E-B’s director of public affairs, said during a recent tour.

For example, Dosch sold a Midtown tract for $175 per square foot to an apartment developer a couple of years ago. That same tract sold five year prior for $50 to $60 per square foot, he said. Several Midtown landowners are currently asking $200 a square foot.

“Land prices (inside the Loop) have doubled and tripled in the last 10 years,” Dosch said. “The Heights may have quadrupled.”

“Real estate is really expensive,” H-E-B’s Helfman said. “To get into an urban footprint, we had to get creative. We had to partner and go up.”

Grocers, in particular, are an attractive partner because they serve as a destination amenity for residents and office tenants in mixed-use projects. While mixed-use apartment projects with retail and office can charge a 15 percent rent premium to residents, grocery-anchored projects can charge a higher 20 percent rent premium, according to a recent Urban Land Institute study.

“People are willing to pay for that direct connection and convenience,” he said.

Delivery dilemma
Developing a grocery store as part of an apartment or office building does have its technical and logistical challenges.

Grocery stores receive as many as 20 trucks daily, ranging from small vans to large semi-tractor trailers that require ample space to navigate around loading docks. Bread, beverage and food deliveries must be scheduled around apartment and office tenants. To address those issues, in part, apartments in both the H-E-B and Whole Foods projects feature dual-pane, insulated glass windows to minimize street noise.

Grocers accustomed to wide-open floor plans in suburban stores must account for large concrete columns in a midrise project. At the same time, refrigeration and kitchen exhaust ducts must be vented around the apartments while bathroom plumbing must be routed around the grocery store. In the new H-E-B and Whole Foods, developers decided to place a parking level above the grocery store to allow open access to plumbing lines and vents.

While grocers share a parking garage with office and apartment tenants in a mixed-use project, they tend to prefer separate entrances and parking for customers. Grocers installed escalators and large elevators, and in the case of H-E-B a special escalator for shopping carts, to move shoppers between the store and the parking garage.

Designing a mixed-use project with a grocery store typically takes longer than a freestanding supermarket. But the benefits of having a built-in customer base among apartment and office tenants makes the extra effort worthwhile, said Jonathan Brinsden, chief executive of Midway Cos., which developed the Buffalo Heights.

“It’s really a collaborative effort to create the best possible experience for everyone involved,” Brinsden said. “You have to identify where potential conflicts exist and try to resolve them.”

No more stocking up
Ziegler said his architecture firm is working on more grocery-anchored mixed-use projects nationally as urban neighborhoods have drawn more residents in recent years. Houston has several such projects in the planning phases, he added.

“You’re going to see a lot more of this,” Ziegler said. “We’re growing up as a city. It’s exciting for these folks who live in these projects.”

Instead of stocking up on the weekend, residents who live above a grocery store can take multiple trips a week, enjoying fresh produce and meats. Without the need for a car, residents can drive less and walk more, deriving health benefits. And eliminating large swaths of surface parking helps with flood control.

“There is a real value to being above or adjacent to a grocery store,” Brinsden said. “A grocery is one of those great amenities that drives a community.”

Back to All Posts